We said goodbye to Aunt Helen this weekend. A feisty old gal who lived a colorful 84 years, went home to be with Jesus on March 11, 2008 and our family gathered in Front Royal, Virginia for her memorial service. Here is a picture of the person we lost. I wish you could have seen some of her very fancy photos from the past – wow! Let me tell ya, Aunt Helen could work it, honey! 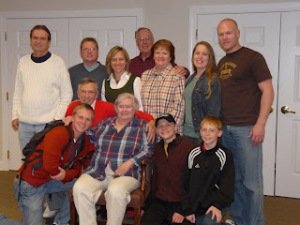 Although our purpose was solemn, deep in the heart of Shenandoah Valley, God’s face shined upon our time. Our family met 20 new relatives, Mark saw cousins and second cousins he hasn’t seen since he was a little boy. I know Aunt Helen wo
uld have had a blast with all the fun we had.
I reflected on all the new people we had the pleasure of meeting. If it hadn’t have been for Aunt Helen’s passing, we might never have known each other. Never bothered to meet or hug or care about each other. Here is a picture of the people we now call kin.

We had seen Aunt Helen during Christmas time and thought it might be the last time we saw here this side of heaven. I will never forget the silver gravy dish Aunt Helen sent us for a wedding present. I believe the gift arrived about two years after our wedding and it was simply exquisite except for one big problem…the handle on the gravy dish wasn’t attached. Although it has never been a functional item because most people don’t like to have their fingers burned when getting their gravy, we have always hung onto it as a funny reminder of Aunt Helen’s quirkiness.
Neat things about Aunt Helen:
She was an avid doll collector. During her memorial service, even the pastor commented on the lovely collection of dolls she had procured over the years. She even named them and had great affection for each one.
She rode as a guest on Air Force One, the presidential airplane!
She had an office down the hall from the Vice President and worked in the White House for many years. She worked for the Nixon, Carter, Ford and Reagan administrations. Quite impressive!
One time while working at the White House, she even had Robert Redford (for you young-in’s, he’s like an old Brad Pitt) come into her office needing directions! Hallo!

She loved Scotland and Paris.
The last time we saw her, although Alzheimer’s was robbing her memory and congestive heart failure was making her breathing quite labored, she repeatedly told us about the time she drank egg nog with her nieces in the White House. My boys fondly recall those moments we shared.
My father-in-law, his niece and her husband have lovingly cared for Aunt Helen since she never had children of her own and hadn’t been married in ages. Without them, Aunt Helen would have been deprived of many blessings. In the 19 months that Aunt Helen was in a special care facility, she was able to renew relationships and find connection with family. God allowed us to say goodbye and also to say hello and I think that’s pretty special. Although that’s not especially profound or anything, it has given me reason to rejoice.

5 thoughts on “Goodbye and Hello”