“I’ve never dehydrated anything before! This should be interesting!” Flat Stanleyette pictured with dehydrated cauliflower and an undehydrated butternut squash. Huh…

I certainly hope (and pray) that my niece, A., had a good day at school on Friday. Friday would have been a very important day to have a regular, wonderful time as an elementary school student.

These are soap nuts and this is the way Aunt Cindy and her family wash their clothes!

My niece’s Flat Stanleyette hopefully arrived at school along with a box of surprises. Yesterday would have been a fitting day for happiness to fill a classroom…

Here are a few of the highlights –

1. Flat Stanleyette learned about soap nuts sold by Olive Shoot Institute. This is our family’s small business. This is the way we do laundry! At first FS thought we were crazy even though she appreciated the fact that soap nuts are 100% biodegradable, organic and natural. To think that there are trees in India that produce a berry which clean clothes blew her paper mind. However, when she noticed that our clothes smelled fresh and clean, our towels were fluffy and fresh, she became a true believer. Upon her insistence, I gave her some soap nuts to bring back home.

Flat Stanleyette noticed that sometimes Ike would like to eat a dorito.

2. We kept her busy dehydrating and learning about preparing healthy food. She helped slice the fruit and vegetables, place it on our Excalibur dehydrator trays and spritz some lemon juice on things to keep it from turning gross colors. She helped make vegetable powders with our Vita-Mix and imagined all the ways they could be put into soups, etc.

3. Sometimes FS looked surprised when we told her we eat persimmons, kale, spinach and banana chips. We don’t always eat organic stuff or healthy things but we wanted her to try new things and expand her palate. When Flat Stanleyette returned home, she brought dehydrated banana chips, persimmons and apple slices. She was super excited to share them with the kids. Hope you guys liked them!

4. Our paper friend joined me in learning how to make fabric bowls. “Wow, this takes a lot of skill and patience!” she declared one afternoon. FS went to bed very tired that night with a slight headache.

A collage of fun!

5. It was her first time at a high school men’s basketball game and as expected, FS drew a lot of attention. Thankfully, her new best friend Erma helped her deal with all the looks and stares. Erma is a Guinea pig girl doll and proud of it! They both agreed everybody was probably jealous of their beauty. It was a fast-paced game and she is now the biggest fan of #21 whom she began calling “Lebron” even though he is an orange hair, freckle face teenager. The coach really wanted to get a picture with FS following their big win.

Flat Stanleyette and Erma became fast friends and cheered on the team!

The sound you hear in the background is my dehydrator. I apologize, I know it’s loud. That’s why it’s in the dining room. Sorry about that but it’s the time of year where I seem to use it the most. I harken back to this time last September when my oldest OS was preparing for his second ACL surgery and I was busy making him healthy treats to help his recovery. Wistful, relieved and bountiful describe that time and season of life.

My house smells like apples and cinnamon. I have apple slices, apple leathers loaded in many dehydrator trays and granola filling in the remaining of the nine trays. Ike is eating his weight in granola and in the past week, I’ve also dehydrated beef jerky for a friend which I carefully kept away from my drooling, orange hair, freckle face OS.

Autumnal colors enter my home and since finding the Sherwin Williams ColorSnap app, I’m a dither with discovering possible color pallets for my home, should the opportunity ever exist.

So today I grabbed my iPhone after making a batch of granola and took pictures. With 50 pounds of old-fashioned oats, (yes, 50), I’d say I have a lot of granola to make. Throwing in some dehydrated cherries from the summer or a handful of pepitas and suddenly I feel like a fancy girl. I like fancy girl feelings.

With a hankering for another kind of crunchy, I began soaking flax seed, sesame, poppy and pumpkin seeds for a raw cracker and took more pictures. The colors were captivating and the names Sherwin Williams uses for each color, well to me they seem inspired. (Btw, I’m not a paid endorser of Sherwin Williams!).

Which one of these colors would you most welcome into your home? I’d love to hear and if you use the app, tell me what colors you discovered.

In my next post, I’ll write about pre-soaking grains. I’m learning about this concept and it’s intriguing.

Until then, here’s the recipe I use for the raw multi-seed crackers –

The night before, put the flax seeds in a medium bowl and add 1 cup of water. In another bowl, put the mixed seeds and add water to cover.

In the morning, drain the mixed seeds well and add them to the soaked and now gel-like flax seeds (these need no draining). Add the salt and paprika and stir well with a fork to combine.

Spread very thinly on one or two dehydrator trays lined with solid sheets. An offset spatula, the kind you use to frost a cake – makes spreading easier. Sprinkle a touch more salt on the surface. (I don’t because they seem too salty).

Dehydrate at 110 degrees fahrenheit for about six hours until dry and crisp. About three hours into the dehydrating, flip the crackers so they will dehydrate evenly. Break into pieces once cooled.

I hesitate to even write this post lest some of you become envious of my exciting life. 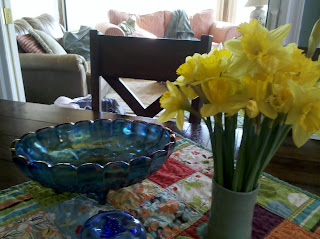 Going hither and yon as I do, one minute I’m dropping a cylinder of salt on someone’s head at Trader Joe’s, the next I’m waiting for my stepfather to finish his colonoscopy.  Oh, the thrilling pace of my life!

So if you must, depart from this post immediately. I will understand.

But yesterday was a Red Letter, adrenaline pumping day for me because…

I became a food dehydrator owner!

About an hour after establishing a location for my new toy, two bunches of bananas were sliced, spritzed with lemon juice and ready to christen my Excalibur Model 3926T. Btw, the “T” stands for the 26, yes, 26 hour timer, an outstanding feature, if I do say so myself. 🙂 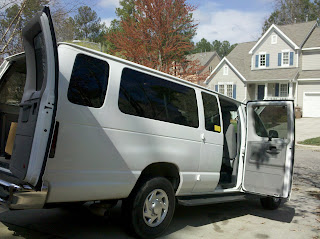 ow my first batch of dried bananas sit in the pantry. They look and sound like wooden nickels but taste much better. My orange hair, freckle face OS isn’t completely enamoured with them but I’m not giving up. I’m going to make this work in my family. My OS and the Hubs will appreciate my efforts at conservation and nutrition or face my wrath.

My new appliance murmurs away the kitchen and today, the trays are loaded with apple slices, strawberries and carrots. The apples were going to spoil soon, it is pleasing to put them to good use and not be wasteful. Don’t you admire people that can put things together simply? They use everything and don’t squander the smallest morsel. They also don’t hoard and that to me, seems to be a challenge. I want to be the kind of woman who is a faithful steward of the things she is given yet I also desire a clutter-free, welcoming home. Striking the right balance requires skill.

As silly as getting a new food dehydrator may sound to some, trivial though it might be to a person who pities the stay-at-home mom for the supposed drudgery of her life, I am thrilled with my new purchase. The thought of caring for my family, feeding them healthy things and learning new homemaking techniques brings me contentment. 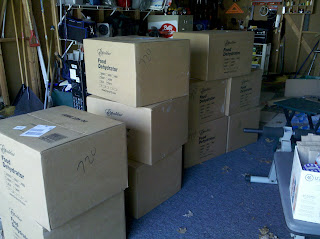 According to Mary Bell’s Complete Dehydrator Cookbook, why in no time, I will be making Backpacker Tuna a la King and Fancy Tomato Leather Chips. Yes, my OS’s lunch bags will be filled with beet leather and homemade crackers and friends shall crowd around them begging for a mere taste of these delicacies! My West Point OS will plead and beg for boodle loaded with Backpacker Fancy Macaroni and Cheese or pineapple sliced seasoned with cardamom. I can see it now! 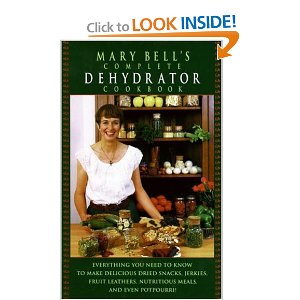 While reading the recipes to Ike, I prophesied a future father/son camping trip complete with Backpacker Rice Balls Wrapped in Nori and kayaking adventures energized thanks to Tom’s Red Wine-Marinated Dried Fish. My comments were met with an impish grin and rolling of the eyes.