This is a slight 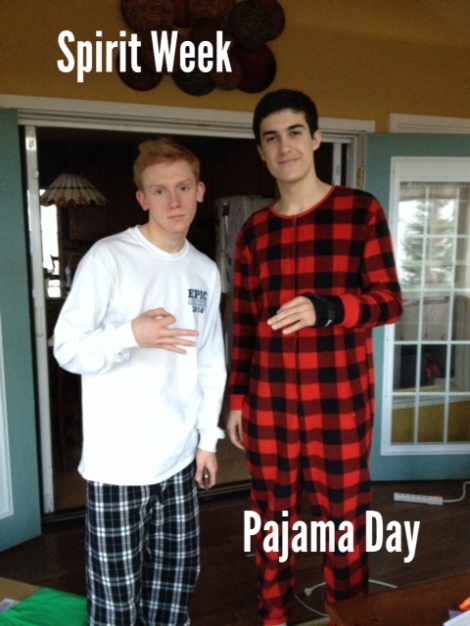 But I live for five days out of the year

More than Christmas, my birthday, Thanksgiving and the first and last days of school combined

Since my oldest olive shoot was in middle school, Spirit Week has been like my Super Bowl, my World Cup, my time to shine as a mom…

Because you see, as my three sons have oft reminded me,

Technically, it’s not MY Spirit Week

It’s an annual battle royal as we compete for control and preparation.

It’s private conversations between my friends as we ruminate about possible ideas all the while acting cool, calm and collected around our kids.

It’s when I google and Pinterest and imagine secretly wishing there was a Spirit Week for moms because we need it more than they do.

It’s me being the person who wants to plan ahead versus my olive shoots not wanting to think about any of it until maybe the night before, I’ll spare you the details since they are usually too painful to discuss.

But last week was Spirit Week and Monday was Pajama Day. In previous years I have sewn pajama pants for my boys. Heck, I even purchased grapefruit fabric about a year ago in anticipation of making Ike some citrus inspired sleeping pants because he loves him some grapefruit. To my chagrin, however, now as a junior in high school, Ike rebuffed my offer. This year he was boring but our borrowed Brazilian olive shoot wore this onesie which surely made the ladies swoon!

Perhaps the low-key Pajama Day was God’s way of giving me a slight Sabbath before the preparation for Tuesday-Thursday of Spirit Week.

I can’t wait to tell you about what I did!

Does anyone else know the joy and agony of Spirit Week???

Oh how I love Spirit Week!

I love it so much, if it were up to me, every school would have a Spirit Week just for parents.

There was no Spirit Week when I was in middle school or high school so I live through the SW of my OS. Yes, according them, I’m kind of like a stage mom when it comes to Spirit Week.

With Aaron’s medical struggles, there was less parental involvement in Ike’s SW this year. This resulted in my orange hair, freckle face OS wearing a pair of store-bought pajamas on Pajama Day. We had even picked out special material six months ago for me to make just for him. Alas, Ike decided he wanted to show off these pajamas. He won a gift certificate because of his footed sleepwear. 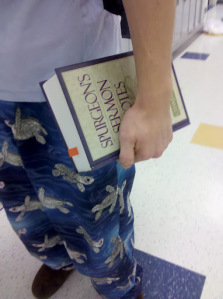 But now that my middle OS is feeling so much better, nearly all of my parental energy pours into Spirit Week 2011.

Monday morning, Aaron pranced into school wearing his designer-made sea turtle pajama pants. I wanted to create a sea turtle applique for the t-shirt but he sternly spurned my suggestion.

Tuesday was Animal Kingdom Day. Last year my middle OS was a pupa. We twirled yards of brown toile around Aaron to encase him.

It was truly hilarious to see the perplexed looks of students and teachers. They asked Aaron what he was and he confidently stated “a chrysalis in a cocoon.”

Then in the middle of Mrs. Davis’ Spanish Class, Aaron asked if he could go to the restroom.

When Aaron returned he had metamorphosed into a beautiful, extremely large butterfly ~ He wore his grandpa’s really yellow golf pants and custom-made wings.

We thought this was an apt description of adolescence and doesn’t every teenager want to be reminded of puberty on Animal Kingdom Day? I thought so!

So how do you top being a pupa? 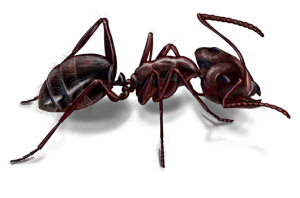 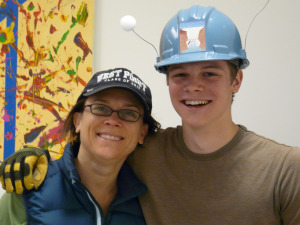 Well, we’re not sure but staying in the insect world, this year Aaron was a carpenter ant.

My middle OS donned a hard hat with antennae, an electric drill and drill bit along with a tool belt. He also “grew” an extra pair of legs which I sewed last night. 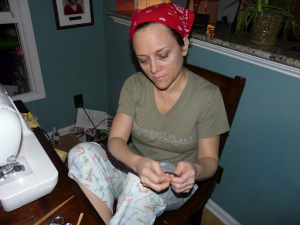 Here is proof that I am a great mother – making carpenter ant legs just before bedtime.

There were many creative animal costumes. For example, Zack, Aaron’s best friend was a swan complete with a feathery behind that wiggled back and forth as he walked.

Aaron will be a senior in high school next year. I’m already thinking of ideas.

Just wait, the rest of the week is quite creative and unique also!

PS. I just learned that Aaron and the science teacher were the only invertebrates in the school today! Wow, I’m even prouder now! 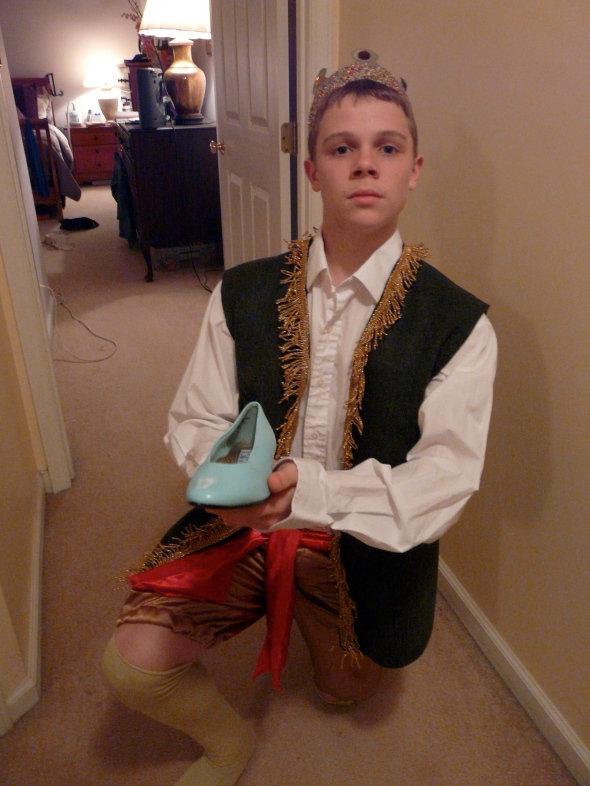 As Spirit Day drew to a close, it was Dress Up as Your Favorite Hero Day and Aaron decided he wanted to be someone extra special and quite appropriate – Prince Charming.

My 13-year-old OS has the pretty face and the affable personality but lacked the actual costume. We don’t do a lot of dress up in our family of boys but with a little ingenuity, we came up with a pretty cool outfit.

First we went to Staples and got some metallic posterboard.

I didn’t know they made metallic posterboard so that was quite convenient. We cut a crown design out of the posterboard and I glued a ton of little beads around it. It looked so shimmery and royal. Kind of like real jewels but not really. Check out the artistry… 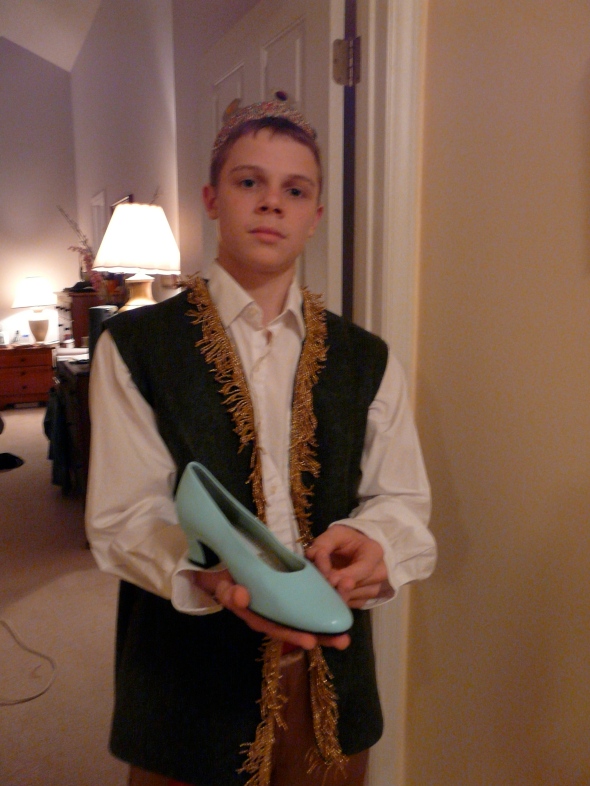 I had some satin gold fabric and against all odds, I made my first pair of satin prince pants. My dumb sewing machine was acting the fool so my wonderful friend Michele let me borrow her top of the line machine.

It’s a $1500 sewing machine and man, that baby can purr. I’m not sure I’m giving it back to her, I seriously loved that machine. I have told my husband that if he really loved me, he would get me that machine. I’ll let you know how that’s going…I was definitely not worthy to even use the foot pedal of this fine piece of machinery, I savored every second and stitch.

After finishing the prince pants, I also made him a fancy slate grey vest complete with gold trim. It was so simple to make but I was really proud of myself! I am totally in the zone when I am doing things for my family. During a quick trip to the Goodwill, I found a nice man’s white collared shirt for Aaron – and then the biggest find of all, I bought a pair of women’s shoes. He wasn’t going to wear them, rather he took one shoe to school as he searched for his lovely Cinderella.

As luck would have it, I had a scrap of red satin fabric to make a little sash. When we put the costume together, he seriously looked like Prince Charming! Even when he was standing next to his best bud Zack aka Peter Pan.

This was a Spirit Day our family won’t forget!