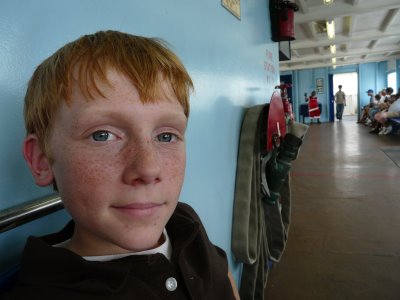 1. You are a higher form of life. There is nothing lower than a plebe (well, almost). Note chart.

2. You can enjoy unlimited chews. No one is counting your bites. You can even swirl food around in your mouth and it’s all good.

3. You can sass at your superiors (although still highly dis- couraged) and not have to do push-ups. You may suffer other unpleasant consequences but not push-ups.

4. You can also pass gas and not have to tell everyone or make noxious fume hand signals in the air to everyone around you.

5. You have a first name and you have heard it said in the last 24 hours.

6. You can say “Hey!” “How’s it going?” “Hello, my friend!” or even make up your own salutation. These are just a sample of myriad greetings available to you as a dorky 6th grader!

7. Your bed can be slightly messy and you can sleep under the covers.

8. You do not have to memorize your mama’s dinner menu six days in advance.

1. Cool uniforms with your name on them.

4. Huah. If you need a translation, you just don’t get it.

So which one is your personal favorite? Which one would be the most challenging for you???

“You have 60 seconds to say your farewells,” a member of the cadre announced as we all stood and prepared for our goodbyes.

A petite framed cadet whom I really wanted to hate was just doing her job. I don’t envy her of having the task of separating parent and family from child.

Of course all of us knew it was coming, the mood was solemn as we all filed in and took our seats. I wasn’t the only weepy mom in the bunch so I felt a kindred spirit among us.

Oh I held him so tight. Be strong, be strong, I tried to remind myself.

There was such a feeling of love and pride, but we all entered into some private, intimate place in our hearts and hugged our babies for the final time for a long while like we were the only ones in the place. Nate grabbed his meager belongings and confidently strode to the front of the auditorium and never looked back.

That was a good thing because if I had seen his face one more time, I would have taken it as a sign to rush forward to get him. I know he is divinely placed where the Lord wants him to be and this is perhaps the most unselfish thing I have ever done as a mother. We prayed and prayed for the Lord to put him where he was supposed to go. I cannot second guess my Heavenly Father. Saying goodbye and letting my beloved child set forth into a new life, I am filled with tears and pride, both never ending.

I remember child birth being very painful but this is really rough. I was in labor for four hours, and it hurt like crud and this process is much longer. West Point is such an austere and noble place, I am humbled to have a son who is in the class of 2012 and have the hat, t-shirt and matching handbag to prove it. I shall be wearing black, gold and gray for a really long time. There is a dignity and a respect I don’t recall seeing at other college campuses we visited. This is the right place for my son and I am thankful to have met a lot of nice guys Nathan will soon be calling friends. Take a look and click here at this link to see what his first day was like. OY!

We are all entering a new phase in our lives. After saying our farewells, there were two floors of vendors and organizations to greet us. Nearly ever booth had a box of Kleenex. It was reassuring to see that in the midst of all this decorum and granite, they had chiseled out a lot of compassion and concern.

We arrive home tomorrow and I do laundry which will include some of Nathan’s dirty clothes. It will be the saddest load of laundry I have ever done in my life thus far. I found the toe nail clippers he used before we dropped him off at West Point. They were in the hotel bathroom and yep, I cried.

The Hubs and I weren’t the only ones struggling.

For you have been my help, and in the shadow of Your wings I sing for joy.
My soul clings to You; Your right hand upholds me.