August 5, 2011 became a day our entire family will remember. For my oldest OS, it was not only a day that marked the passing of my grandma but Nate endured an additional painful moment that the rest of us didn’t.

It was an hour before completion of CLDT training at Fort Bliss. Overall it was a lackluster experience for my OS and I best leave it at that. Putting it mildly, Nate was ready for it to be over and to return to West Point for the beginning of his “firstie” aka senior year. Prior to leaving the base, Nate was relieving stress by joking around and wrestling with some of the other guys. The next thing he knew a much larger NCO (non-commissioned officer) pounced on Nate and threw him backwards. As he dropped to the ground, Nate heard the dreaded pop in his left knee.


In 2007, Nate first heard that “pop” during a soccer game. It marked the end of his soccer season for the year. My OS was 17 when he had knee surgery and began a long rehab for a torn meniscus and anterior cruciate ligament (ACL). In time, he recovered well and was resolute in absolutely never having to relive that experience ever again.

But the Lord had other plans on August 5th. Now on Wednesday, Nate returns to the operating room. Not in the comfortable environs of our hometown but this time at West Point. And on the same knee no less! Tomorrow my middle OS Aaron and I travel to New York to be with Nate before and after the surgery. According to the surgeon, my OS will have a different operation to fix the problem. Based on Nathan’s future job as a 2nd Lieutenant in the Army, the surgeon advised him to have a patellar tendon graft. This is a harder surgery with a tougher rehab and an uglier scar but it insures better results for his long-term success. I guess you could say Nate will have a Soldier’s Knee.

My boy will have to summon a great deal of strength to heal from this surgery. With the help of his fellow cadets (let it be so!) and his faith in the Lord, I know he can do this but I hate that I will be so far away. Would it really be that awkward if I just stayed in the barracks and promised to not be a bother??? 😉 He will return back to class almost immediately whereas the last time, Nate recovered at home for nearly two weeks. Four years ago I could take care of him. I brought him food, as a family we helped him. Nate had plenty of visitors and attention, we all rallied around him. Now I will only be able to stay for a few days. His dorky brothers even had daily competitions on who could collect the most urine in the handy receptacle near his bedside, I doubt anyone is going to volunteer for that job!

So to the extent I feel comfortable, I’m sharing part of my prayer with you, dear friends.

As you well know, I don’t understand the reason for this injury but I don’t have to comprehend all your ways. You don’t ask for my permission and I realize that. Forgive me as I acknowledge my weakness in this area for even questioning your sovereignty about why this happened again. Lord, in your perfect time, speak to me and give me ears to hear. Calm my anxious mama’s heart and allow me to trust You through this process. Reveal to my boy new things about who You are. Bless my child with Your presence when he is in pain and feeling discouraged. Surround him with the compassion and kindness of others and allow my boy to notice your manifold blessings. Though I will not always be near my son, you promise in your Word to never leave or forsake us. You never sleep, you are always present and that is a comfort to me. Lord, though his knees aren’t the greatest (!) you and I both know Nate is tough but so very tender hearted, thank you for fearfully and wonderfully making him this way. Because of You, he can do this hard thing! In Jesus’ name, amen.

While our oldest OS was getting buzzed through the air by a B-52 bomber thanks to the Army/Air Force game last Saturday, the rest of us attended a cat party. Yes, you read correctly, cat party.

Nathan was walking on post at West Point when all of the sudden, the autumn air was pierced with the sounds overhead as the B-52 tore through the sky.
And 800 miles away, we sat at out on our neighbor’s deck and “celebrated” the return of their beloved cat, “Taylor” (not his actual name).
Even though Army lost, I think Nate had a better time than we did. It was our first cat party and there were several rather awkward moments. The strangest thing was when our neighbor joyfully announced, “We have our son back!” He made this remark stroking his furry pet as his human son stood nearby. I think Taylor brings more happiness to this man than his own child. Priorities, anyone?

This event has allowed us an opportunity to speak about God and His unfailing love. Upon first learning of Taylor’s sudden disappearance, I immediately called our neighbors and offered our thoughts. We knew they cared a lot about their cats and assumed this was a big shock to them. A bit of mystery still brews about exactly what happened to Taylor and his disappearance. They are convinced it was the result of their arch enemies aka, the neighbors across the street, but that doesn’t make much sense to me.
Anyway, the husband came over a little later and told me how deeply touched they were by our kind thoughts. I told him we were sincerely sorry to hear about Taylor and said that we were praying for them.
A couple days later, the neighbor dropped by again. As he was talking to my husband, I ushered him to our kitchen and pointed to our blackboard. On the blackboard, I had listed a variety of people we were praying for. I wanted him to see his family’s name prominently placed on the board. I had no idea he was coming over so I didn’t secretly write their name or anything like that. It had been there all along. I distinctly remember our neighbor being very moved by this and for a moment, I thought he was going to cry. 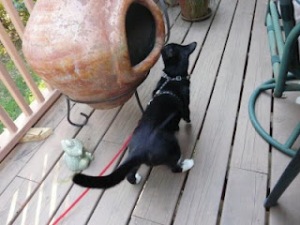 I told him that God cared about everything, even things the world would deem trivial, He still cared. It blows me away when I think that there is a Lord who cares about about every aspect of us.
Which includes the owners of Taylor, the cat
And this man and all who love him

And this family moving to Papua, New Guinea

And this country I’ll be in, Lord willing, this time next week
And an imperfect sinner like me.
All reasons to celebrate and rejoice this day! Remember this the next time you’re invited to a cat party or have a B-52 overhead, both of which I hope don’t happen to you anytime soon!