Eric and his family.

Lord willing, Colonel Kail will have a retirement ceremony on 31 May at West Point, then the packers will come three days later.

With the diagnosis of stage 4 transitional cell carcinoma, life began to drastically change for the Kail’s. The one thing that hasn’t wavered but remained steadfast is Eric’s optimism and faith.

Eric is an awesome dad and husband. He’s a Colonel in the United States Army and has also served for over 25 years as an Army Field Artillery Officer in both conventional and special operations units. He has several combat deployments, including Operations Desert Shield, Desert Storm, Enduring Freedom, and Iraqi Freedom. Eric also has a PhD in organizational psychology. His latest assignment was as the course director for military leadership at West Point.

Impressed? You should be!

Here’s where you come in. Would you be so kind as to pray for this man? Eric has a few medical procedures to complete prior to heading for Texas. A few new spots on the spine and sacrum causes weakness in his right leg and severe pain and stiffness in both legs.

Though he moves around like a 90-year-old man, Eric retains his wit and wisdom.

In return for your prayers, with Eric’s permission, I am sharing a recent experience he had at the airport.

Here’s the remarkable thing that happened to him at the airport.

I’m very prone to take matters into my own hands and to gut things out, get the mission done without complaining. I was beginning to feel like my ability to do certain things was dropping off and a book I was reading allowed me to spend time covering God’s instructions to Elijah.

Specifically, delivering bad news to Ahab then going to live in a cave during a drought.

God told Elijah that he would have birds bring him food; not the kind of delivery we think about for food these days. Now, I’m not by any means comparing myself to Elijah, but the lesson was clear.

God will provide every internal and external resource needed to do what He calls us to do.

Well, the day after I read this story I met a complete stranger in a crowded airport lounge.

He was an Indian man who is a missionary living in the U.S. and still tied to missions work in India aimed at reaching their remote tribal populations.

In fact, his son had died in his 20s while working as a missionary in a remote tribal village.

We began discussing what we did and he asked about what God has called me to do through my battle with cancer.

I shared with him that unless my health took a positive swing, that I may have to curtail my speaking engagements and such.

Then he asked me if I knew much about Elijah.

I laughed and shared with him about what I had read the day before.

As my son would say, “Colonel Kail is the man!”

So, we stopped what we were doing and he prayed for me right there in the middle of a very crowded airport lounge.

He prayed specifically that God would make clear his provisions for me and my family as we set out to do His work.

No way it was an accident that this man and I spent an hour together in a crowded public spot.

The next day, my devotional was from 1 Kings, specifically Elijah’s meeting the widow who had just enough flour and oil to make one last meal for her and her son before they died.

Elijah instructed her to make some bread for him too, and that God would provide for her until the drought was over. She did and her flour and oil never ran out.

However, her son did die while Elijah was staying as guest in her home. She asked if this was a curse from God. Elijah took the boy up to his bed, laid on top of him, and prayed three times for God to restore the boy’s spirit to his body. God did just that.

So, I get the message pretty clearly.

Our natural default is to look for our own strength and resources to do even what God has called us to do, when He will supply all we need.

This is hard to do when coordinating things like a final move, buying a home, arranging travel, conducting a retirement ceremony, and oh yes, battling cancer.

Just like meeting Eric and Gigi at Sunday School many years ago in Apex, North Carolina, God arranged for Eric and this man to bond in a crowded airport lounge. What were the chances of that? I love seeing God move in his people.

Let’s move spiritual mountains for Colonel Kail. Share this with others too. 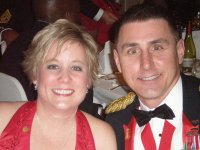 Please pray specifically for the following:

In addition, he has promised to commission FIVE cadets at West Point next weekend. He swore our son in last year and it was such a meaningful honor.

Let us pray without ceasing for this man who so freely gives to others. Bless you, Colonel Kail!

Here is the background story if you missed it.

2 thoughts on “Colonel Kail is my friend, part two”