I’m not sure when I gave the Hubs his birthing necklace. My hunch is immediately. Who could blame me? Wouldn’t you? The authentic “African bone” pieces were carefully selected by my flea market friends in their humble country showroom. Corresponding beads tastefully matched the turquoise orbs in my own necklace. And the manly black beads of alternating sizes, well it was nearly Zulu warrior-esque. Mark must have felt a surge of testosterone when I handed him the silk bag. He deserved this gift and I couldn’t wait to see his response.

Now 18 years later, the Hubs describes the moment as “awkward” and “conciliatory.” Btw, “conciliatory” is a word he most certainly cannot spell. But what was he to do? He draped it around his neck and hoped for the best.

“I believe this moment is equally ‘awkward’ and ‘conciliatory.'”

On August 30, 1994, I went into labor while at work. I had lunch with a client at the Chili’s on Glenwood Avenue and warned her that I was having contractions. As the lunch progressed, so did labor. I paused through the pain and eventually called the Hubs and told him to meet me at the doctor’s office. Shortly thereafter, my client called to tell him to pick me up from the restaurant. I wasn’t going to be able to drive.

We floored it to the OB/GYN where it was abundantly clear Aaron would soon join the world.

Before leaving work, however the Hubs called my mom and told her to get to the hospital urgently. My mom was working at a department store in the jewelry department. Note the irony. Though she had many baubles to choose from, none would suffice. My mom told the Hubs she had to first go home. She didn’t have her necklace.

And you know what she did? That blessed woman booked it all the way to her house, placed that treasure upon her neck with little time to spare and walked into the hospital room per her daughter’s orders. 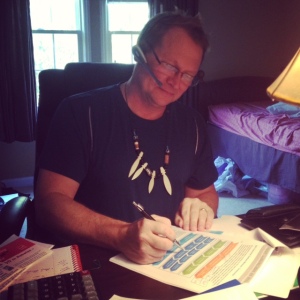 In a wistful moment, during work, sometimes the Hubs will just wear his birthing necklace and remember those blissful times :&

So what happened to Mark’s birthing necklace? Where was mine??? After all that travail and travel, my plans were thwarted and Mark’s prayers were answered. Both birthing necklaces were at home on that hot summer afternoon. My mother was the only one who wore the necklace! Without a second thought, my middle OS popped out with great gusto. He’s been tearing it up ever since.

“I’ve been tearing it up ever since!”

We recently had a dinner party with our pastors and church friends. We played Think-ets and I drew the “bead” trinket. Here’s the link to Think-ets and their new low price! I told them all the story and rushed upstairs to show them the actual necklaces lest they think I was exaggerating for the sake of a good story. You should have heard them all erupt into laughter mixed with pity mixed with relief that they had never faced such a jewelry dilemma.

One day Aaron will get our necklaces. I’d love to think of something special to do with them. If you have an idea, please share. They are emblems of love, devotion, marriage, family and overall weirdness. Thanks for being born Aaron, you have adorned us all with blessings. I love you and miss you. mama ❤

Someone “forgot” his necklace for the picture

10 thoughts on ““The Unveiling” part two of birth, beads and a baby”