One of my children (who shall remain nameless because I like my life,) is afraid of midgets.

If you want to creep him out, turn on Willy Wonka and the Chocolate Factory. I’m not exaggerating. We are a short-statured people so I’m not sure what his problem is but I have been known to sing the Oompa Loompa Song or the Wizard of Oz Munchkin Land song around him. It is funny to see this otherwise very macho OS squirm.

So it’s a good thing this un-named OS isn’t home very much (ahem,) because today would have been very unpleasant for him.
I say this because it’s Spirit Week for the middle schoolers and today is Character Day. My anonymous OS would be in a dither because his orange hair, freckle-face brother along with six other buddies dressed up as the Seven Dwarfs!
When Isaac told me about the idea last week, I agreed as long as Ike wasn’t Dopey. Considering our most recent challenges, there was NO way my OS was going to be Dopey. Or Grumpy!

But Ike is Happy and so am I! Several moms including myself banded together and individually added pieces to the boys’ costumes.

One mom and grandma made hats. They even researched pics of the Seven Dwarfs from old Disney books and pictures! Another mom made white beards and wrote the names of each individual dwarf on a colorful t-shirt. Talk about authentic! I purchased seven pair of black sweat pants on sale at Wal-Mart and some twine for a belt. The moms are as excited as the sons and our collective talents made this particular Spirit Day less stressful and totally adorable!

To Ike’s chagrin I came to school twice today to take pictures. Apparently there is nothing worse for a 13 year old boy then seeing his mama two times in one school day, even when she’s wearing makeup! Excitement filled the air, giggles and smiles abounded. I cracked up at the creativity in the middle schoolers. There were two guys who dressed up as Michael Jackson, before and after. There was even a Lucky Charm leprechaun. So fun! 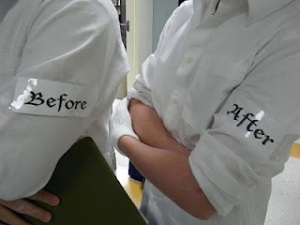 My OS attend a private school. They wear uniforms, adhere to strict behavior policies and must study hard for the stringent academics. Spirit Week is five days when the standards are just as high but the atmosphere is more relaxed. High school Spirit Week begins next Monday and it’s sure to be memorable as well. If Aaron succeeds in his plans for Spirit Week, it will be epic, mark my words! 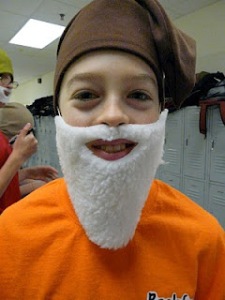 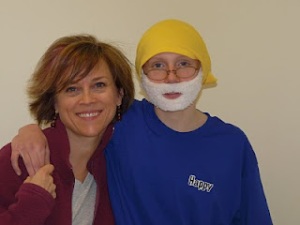 I leave you with some pics of the recent fun and links to former Spirit Weeks we have enjoyed.
We’re already brain-storming about next year!