Chicken broth and me have a thing. I’m not sure when it started but I’d say we’re pretty hot and heavy. Perhaps it began (cue dreamlike music) to the time when I went to Lima, Peru and helped in a local soup kitchen.

It was 2007, I was on a mission trip and one day our team went to a very poor village where, among other things, I chopped fresh herbs for the local ladies as they made chicken foot soup for the villagers. We were told not to try any food so I don’t know how it tasted but the local village men gobbled it down before they returned to work.

I am a fan of DIY chicken broth and I very much dislike canned soup. Now that I have mastered making my own chicken broth, the Hubs knows he skating on some very thin ice anytime he brings in a can of (HORRORS) soup! 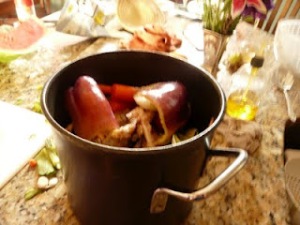 Here are some reasons I like making my own chicken broth.
Healthy – I know what I put into it. Using local, in season vegetables I often get at the farmer’s market means I selected the ingredients my family is ingesting.
Easy – Basically I just dump a bunch of veggies, a chicken or a chicken carcass, garlic and spices into a pot of water, turn the heat up and just monitor their progress. I don’t measure anything and that’s something because I almost always use measuring spoons. You wash the veggies, cut off any yucky parts and let all the goodness cook and simmer together. Simply cut a head of garlic, cut the onions in half and leave the skin on, don’t peel the carrots and go on with your bad self! You will be popping your chicken broth collah in no time at all!
Cheap – Before I started making my own chicken stock, the Hubs would often have the dubious task of running to the store to get me chicken broth just as I was in the middle of cooking. Now I have frozen bags of chicken broth on hand, made from the scraps in my kitchen. I feel frugal!
Fun – It’s satisfying to create something good for my family. There have been times when I have gone a little overboard and the Hubs will say, “Hon, we have PLENTY of chicken broth!”
So here’s the recipe, if you can call it that. My OS love my chicken noodle soup and all the credit goes to the broth.
Yesterday I roasted two chickens and then put the chicken carcasses in a heavy pot. Other times I just put uncooked whole chickens into a heavy pot.
Then check your fridge and cupboards. Get some onions, a whole garlic, carrots, celery, leeks, turnips, parsnips, parsley, green peppers and onions (you don’t need all of these) and put whatever you have on hand into the pot. 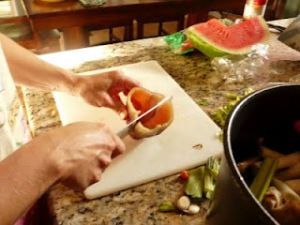 Add enough water to cover all the ingredients inside. Generously add kosher salt or sea salt along with fresh ground pepper into the pot. Turn the heat to high and when it all starts to boil, turn the heat down and let the broth simmer until the veggies are nearly mushy. 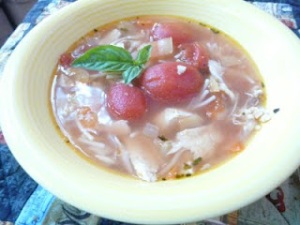 Get either a large bowl or another large pot and with a colander, strain the solid ingredients from the broth. Once you have separated the liquid, you will see how rich and savory it is!
Once cooled, if you notice a layer of fat on top of the broth, simply remove it. You can freeze the broth to use later or immediately in soups, etc. The aroma of soup is permeating my house and I can’t wait to feed the Hubs and the OS tonight!