My mom, sister and I honored the memory of Grandma Varnado on her birthday by seeing Julie and Julia. What a delightful movie that I connected with on so many levels.

During my junior year in college, I lived in France and developed a fondness for French cooking. The French know their cuisine and I lived in Caen, Normandy with a family that took food seriously. In the summer I worked as a waitress in Monte Carlo and during my 10 months in France, I gained 20 pounds. Aside from the blood sausage (a dark red combination of stuff in a casing) tripe (cow intestines which reminded me of a gi–normous white spider web) and kidneys (which were bathing in this thick, creamy, whitish brown sauce which still produces the
heebie–jeebies every time I think about it!,) I tried nearly everything on my plate. Watching Julie and Julia brought me back to that pivotal moment in my life.
But Grandma Varnado was not a French cook. She didn’t whip up fancy aspics or complicated terrines

but whatever she made was splendid. If Grandma were visiting my mom, I would ask for her to make me potato dumplings and she never turned me down. A simple mixture of flour, salt, pepper and potatoes – talk about a cheap meal, yet every time I had a bowl of potato dumplings in front of me, all was right with the world. Just thinking of it makes me long for a steaming, hot bowl of it right now! 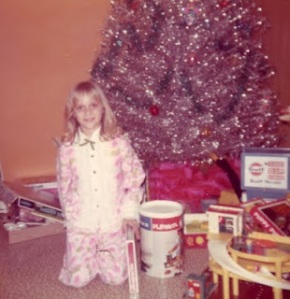 Like Julia Child, Grandma had skilled hands when it came to the kitchen. I’ve come to admire women who seem so at home in the kitchen. I feel pretty confident with my cooking abilities but what made Grandma a hero to me was how adept she was at using what she had already in the cupboards and fridge to create a masterful dish. She made cucumbers drenched in vinegar and onions perfectly seasoned with salt, pepper and paprika. And she made cucumbers with sour cream and dill and I would always get in trouble for sneaking several before dinner. Her cheese ball is legendary in my large extended family. Food was one of Grandma’s ways of expressing her love.
When Grandma was raising her family, there was no such thing as fast food. On the rare occasion the family would go on a road trip, Grandma Varnado would make a big plate of fried chicken. She would then place it securely on her lap while the car tooled along until such time that my grandpa would pull over on the side of the road to feed her brood.

Julie and Julia brought back many sweet memories. I’m hoping this movie will inspire women in their kitchens.
Here’s to all the meals and memories we have savored! Happy birthday Grandma Varnado!

5 thoughts on “Julie and Julia, Cindy and Bea”