It is Club Sign Up Night at West Point! I hope my son attends. I knew that the time was coming up and so thankfully when we were with my oldest OS (oliveshoot) during A-Day Weekend, I was able to impart some very sage words his way.

Don’t be a Marcia Brady
You are wrong if you think that The Brady Bunch was just a cheesy television series that ran in the 70s. Nothing could be farther from the truth.  I watched every single episode, thank you very much. In my basement. With the polka dotted wallpaper. In my bell bottoms.  I had a little crush on both Greg and Peter but probably not at the same time because that would have been wrong.  Plus I could swing my hair like Jan. I speak with authority.
I gave Nathan that advice based on the episode was “Today, I Am a Freshman” first airing Friday, October 13, 1972. Like many awesome shows in the days of disco, it still holds great truth that even a West Point plebe can use. Nearly 36 years later, (almost to the day, give or take about five weeks), I am so glad I have remembered that particular episode.

In “Today, I Am a Freshman,” the legendary Maureen McCormick aka Marcia Brady panicked about becoming a high school freshman. She was unsure of herself and slightly overwhelmed by the new adventure. Thankfully Mike and Carol, her incredible folks, offered wise counsel and Marcia returned to school with a renewed energy. However, in an effort to belong and fit in and not feel like a square, poor Marcia joined virtually every single group at school. It was a real drag.

Since I was concerned that the same thing could happen to my son, I had to do the right thing. So about two weeks ago, while we were eating a late Sunday lunch at Grant Hall, just prior to our goodbyes, I leaned over to my son and told him, “All’s I gotta say is Nate, don’t be a Marcia Brady.”
I wouldn’t exactly say my 18 year old son seemed terribly impressed by my comment but that didn’t dissuade me. He did seem very interested in many groups and activities and as a good mom, I didn’t want him over committing and finding him the same predicament as poor Marcia. 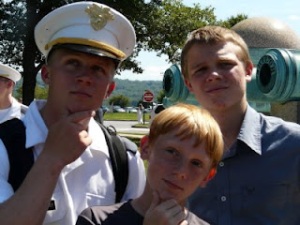 I look forward to hearing from Nate and seeing if he heeded my advice. I sure hope so! Check out this website for more Brady info, how cool is that? Let me know if you have any other helpful advice from tv shows I can offer any of my OS, that would be far out!