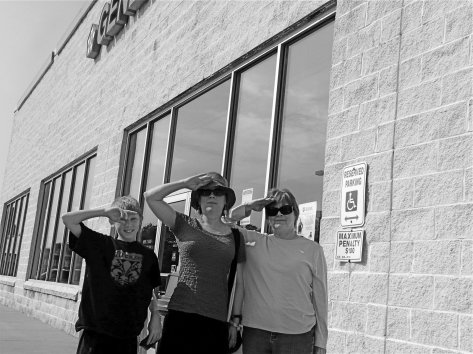 One of my favorite songs growing up was the Barbara Sinatra’s (Frank’s daughter) song “These boots are made for walking.”

As a little girl, I would put on a pair of boots and strut all over the house singing this song – full of attitude and sass.

Now fast forward, nearly 40 years later, that song comes back into my head because over the weekend, we went to Fort Bragg and bought Nathan a pair of combat boots.

It’s been highly recommended that he break them in before reporting to West Point on June 30. Fort Bragg is quite a place.

If you’re looking for a tattoo, a nudie girl joint or a hot dog, then I’d highly recommend Fort Bragg.

I didn’t find the place especially sophisticated or refined!

For this suburban mama, I was missing some of my creature comforts but at least we were able to get Nate his boots and he’s definitely walking in them.

When in the military recommended going to the mini-mall on base, I thought I could get some cool things at a cheap price. That wasn’t really the case.

We had to get our car inspected, our IDs checked, driver registration confirmed just to get on the base. Pretty serious stuff. I didn’t get anything special at the mini-mall unless of course you count that I got hit on by a little Eastern Indian fella. He started talking to me while I was looking at work-out clothes. It was creepy and I certainly didn’t expect it. At first I couldn’t even believe it was happening. My mom heard me talking to someone and then saw me scooting over to her. Finding love at the commissary definitely wasn’t on my agenda! Just give me the stinkin’ boots!

Since I was absolutely forbidden to take random photos of Nathan trying on boots, (which I wanted to do for you, my blog friends), I had to be very conservative with my picture-taking.

Nathan took a few of the crew comprised of Isaac, Mom and me. I don’t think any of us are fit for duty. The military isn’t that desperate – YET! Thank goodness!

Now we need to order his dress shoes. The ones without polish because at West Point you polish your shoes to perfection.

My own feet ache thinking about all the walking and running my boy is going to do in just two months. My heart hurts too but that’s for another post…probably a lot more posts.

3 thoughts on “These boots are made for walking”