I’m not sure why this happened. I don’t consider myself a negligent mother. All I did was ask the guys to play a game upstairs. We were having a snow day, the boys needed to thaw out after killing each other with snowballs. Sounds simple enough, right? The boys were playing Jenga and every now and then I’d hear the familiar sounds of toppling Jenga blocks.
But while in the kitchen, I thought I saw a blurry image of a child darting to the front door. The next thing I heard was laughter and then two children, more specifically two of MY children, shutting the front door and coming back inside. Hmmm…

It’s then that I learned about the Jenga Challenge. The boys weren’t merely playing an innocent game of Jenga in the tv room. They were scheming and the game of Jenga had VERY high stakes. The loser of Jenga wouldn’t just face the humiliation of defeat indoors, he would have to face the brutal weather outside as well. I was completely ignorant of this diabolical plan. If you haven’t yet, take a moment and watch this little video.
After filming this video and showing it to me, about an hour later, the “loser” of this video announced to me that he really wasn’t feeling well. He has been in bed ever since.
My favorite line is when Isaac, the victor, exclaims through his giggles, “Quickly, before Mom sees!”

I guess it was fun while it lasted, huh?

Kudos to you bloggers out there that are able to consistently post during the holidays. I’ve been swamped with projects and family stuff. My mom was in the hospital for four days and that was a bummer. Thankfully she’s home but since my last blog, I’ve been sewing and creating, cleaning, cooking, working, complaining, planning and everything in between.

We also went to the Army/Navy game. Thanks to nine layers of clothing and two blankets, I was able to enjoy the event despite our big loss to Navy.

Hopefully by this evening, my oldest OS will be home. I was watching Good Morning America yesterday morning and they were discussing the weather. “A winter storm is blanketing the Midwest and the Northeast today with snow up to 10 inches in some areas…” It’s interesting how weather events become personal. I looked at the map and knew someone I loved was trapped. My heart sunk.
Our OS was leaving West Point, catching a flight from Stewart Airport to Detroit and despite the cheery voices on GMA, I knew my boy wasn’t coming home on Friday night. He was going from a place of snow (West Point) to another place of even more snow (Detroit). How ironic because at the same time in our neck of the woods, we had the windows open and our other OS were in shorts! While driving, I even had to put on the AC! How crazy is that?!
I had warned Nate that he would soon experience snow in proportions the likes of which he had never known. I was hoping it would have waited until January but that was not to be. After four years at West Point, I’m sure Nate will have wracked up many winter stories which he can embellish for his own kids one day beginning with his travels back home for the holidays as a lowly plebe. As soon as the bus arrived at Stewart Airport and learned flights had been cancelled, our plebe was back on the bus returning to West Point for the night.
I told him to make sure he wore his uniform and to be nice and polite. He says that uniform is the most uncomfortable thing he’s ever worn in his life but I chided him to remember manners on a handsome young man in a uniform can go a long way. 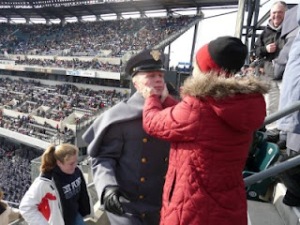 This morning he texted me and said it was so freezing at West Point that there was ice on his jacket! I think he’s going to appreciate the warmth of our home more than ever.
Although I am disappointed that my OS is not home yet, I am looking forward to seeing him tonight. He might be tired and grouchy but he’ll be here and our five piece puzzle will be together again.