As I watched my orange hair, freckle face OS read Psalm 110 before the congregation today, I couldn’t help but wonder how a formerly agnostic, almost atheist, feminist, existentialist, abortion rights activist (yep) could find herself in a moment such as this. 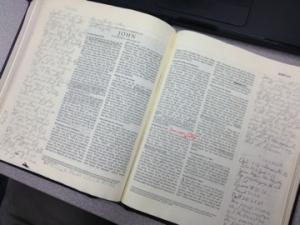 This is one of my sons’ Bibles. I never owned one when I was his age. I’m amazed at the Lord’s kindness to give me children who seek God’s Word.

A few weeks ago, at Moody Bible Institute in Chicago, sitting in Ernest Gray’s The Gospel of John class, the same thing happened. Another surreal experience as my middle guy Aaron casually pulled out his Bible and it was filled with notes in the margins. What am I doing here, I thought to myself.

A redeemed mama and a cherished olive shoot just before class. So proud of this olive shoot/sugar boy.

And then there’s Nate, the 2012 West Point guy who has Scripture engraved in his graduation ring. Sometimes when he calls and is struggling, without hesitation, I will just break out in prayer. Not because I’m an amazing mom (fail miserably) and not in a speaking tongues, snake handling way either for those who might have been totally creeped out imagining this. Just a real and honest exchange of a mother and son speaking to the Father and the Son. Kinda cool actually.

3 John 1:4
I have no greater joy than to hear that my children are walking in the truth.

You see I did not grow up in a Christian family. The only time I remember seeing the Bible was after my dad died. Oddly enough, we were looking for some verses to use at his funeral. We picked some fishing verses because my dad like fishing. Not because he was a fisher of men actually he was a fisher of fish(!), trout exactly, but I digress. From my recollection, the Bible was retrieved from underneath the bed. That was where it was kept for safekeeping as to not be scorned by my dad when he was on a spiritual tirade. His understanding of Christianity amounted to watching the Jim and Tammy Faye Baker show on tv or some other wild evangelist while waiting for the next episode of Soul Train. Not joking. To him, the Bible was a source of mockery and pity, something a strong man would never rely or depend upon. But I have to tell you, it’s still weird for me seeing my family so comfortable with God and Jesus. I’ve been a Christ follower for 15 years, a church attendee for over half my life but I remain awestruck to dwell in a home with men who earnestly live their faith.

For more than half my life, I thought the Bible was for sissies. You only pulled that thing out if times were REALLY bad and you needed a crutch. Maybe if you were dying or needed to slay someone verbally who called you out on sin but other than that, normal people didn’t read the Bible. It was only after I began dating the Hubs that I realized that real men can actually admit to believing every word contained in Scripture. The Lord had some work to do on the Hubs but he was a genuine Christian guy who actually OWNED a Bible and it even had his name on it! WOW!

While dating the Hubs, I sheepishly asked him what was up with the guy holding the John Three Colon 16 sign up during a football game. He’s always been a person I can trust with embarrassing spiritual questions since I do not have a rich Christian heritage. I never learned the Sunday School songs, the hymns or the Bible stories. At best, my religion was dogma and rules that did not match up with my sinful lifestyle.

Before my precious grandma died while she still lived by herself in Florida, I remember her proudly stating to me that her Bible had dust on it. She thought that was a good thing. It wasn’t. There was no way she was going to just randomly open it so she didn’t. This broke my heart as I pleaded with her to give God’s Word a read.

So seeing my children, sons, no less, actively pursuing a life of faith in Christ grabs a place in my heart like nothing else. Watching one of my bairn at ease with proclaiming God’s Word as truth is like a bowl of slightly warmed vanilla ice cream with caramel topping and multi-colored sprinkles served with a non-sticky spoon. I don’t deserve this. We fall short. I stumble. My olive shoots are not perfect. The Hubs snores. But yeah, today I saw my youngest  reading Scripture with reverence and maturity.

This is my prayer and it’s for you, random reader or sweet friend too. May images like this emblazen hearts forevermore. May we never grow tired or bored with seeing our family seek God’s face. Lord, if it’s in your will, give us more of this. Glimpses of grace and faith. Rays of hope and redemption.

As Jesus did for me, I pray for the Lord to speak into your life.  I know for some of you all of this might sound awkward and feel uncomfortable, yeah, I’ve been there. God changes things. He transforms people. He heals. He redeems. He blesses. How do I know? I’m living, undeserving proof. 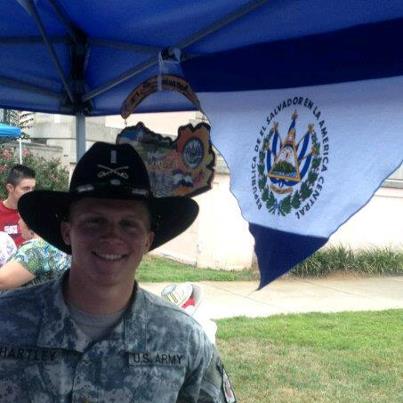 My Soldier wearing his new cav hat! He loves El Salvador (the home of his bonita) and Jesus, they both hold the key to his heart.

I realize not everyone owns a Bible, it was a big decision for me. I remember being scared when I bought my first one! Here’s what I’m wondering – if you have a Bible, do you ever read it? Did you grow up in a family where the Bible was read? Can you relate to my story in any way?