Did you freak out when Mitt Romney said that horrible comment during this week’s presidential debate? You know, the one where he said he sought qualified women to work in his previous administration? As you watched the debate from the comfort of your family room, didn’t you feel as if every advancement made for women was suddenly, irretrievably erased???

It didn’t bother me when I watched it live on Tuesday. Now, days later, I’ve heard about it on several radio stations (both conservative and liberal) and still, the “binder” comment does nothing to strike my ire in any way, shape or form.

But there was a time when that statement from WMR would have gotten my undies in a major wad.

Back in the 80’s, I took a broadcast journalism class in college. We had to regularly find and create news stories for our own mock 30 minute news segment. I had foam shoulder pads and plenty of sass to be sure, but I lacked both transportation and creativity to make a quality news package.

Then one day in Waukesha, Wisconsin, there was a bad snow storm. Correction, MANY days there were snow storms but this one happened to land on a day when I needed to do my broadcast journalism assignment. I contacted the local transportation folks on the phone because I heard that they were looking for people to shovel the snow.

As I spoke to the city worker and interviewed this person, I jotted down the statements to assure journalistic integrity. It was a fairly boring story, big whup, snow in the Midwest. But then she said something that set me on FIRE and I knew I was onto a REALLY big story.

The woman I interviewed said, (are you ready for this? I do hope you’re sitting), she said, that any men who were interested in shoveling snow should get in touch with the city to help with the efforts.

That’s when I knew I had uncovered a MAJOR, sexist, misogynistic, systematic, subversive and pejorative scandal! The woman had said, “MEN!” What was she really trying to say? Was this woman actually going to turn away people to shovel snow simply based on their lady parts? My feminist heart skipped a beat. This was the story I had been looking for!

But I had a problem. Yes I needed to do my homework but no matter how I tried to puff up the story, a sense of perspective came over me. I recalled my own feelings about shoveling snow. I could see myself in my mind’s eye back in Illinois. I have loathed shoveling snow from the moment my father screamed at me on the wintery driveway in our home in suburban Chicago. Numerous times. Scooping frozen white junk off the driveway as a teenager was an artic anathema. As I began to formulate my story, the logical part of me melted the irrational. The big news story never existed. No Woodward and Bernstein moment ever existed here. 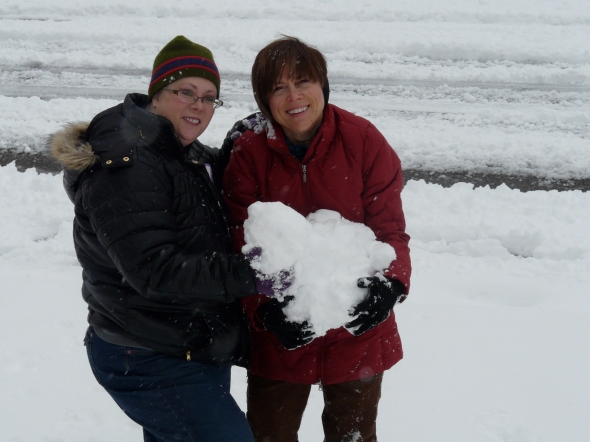 A rare moment, many years later, of my sister and I enjoying time in the snow! Thankfully in North Carolina, it doesn’t last long and I don’t shovel it!

Essentially that’s how I feel about this whole “binder of women” comment. It’s a non-story, something convoluted in an effort to create controversy. I tried a similar technique for my college course and thankfully had a moment of clarity. I don’t get it and in my opinion, people are really stretching Romney’s words to suit their own agenda. It’s like saying a snowflake is a blizzard. We can find other things to complain about, super duper huge things which I choose not to discuss here but as far as this is concerned, the “binder” comment, wow, seriously y’all it was not offensive in any way unless you are trying to fabricate a fake scandal to diminish an obvious one. I’m sorry, get a grip. Nothing here folks, just keep moving on.

4 thoughts on “Thoughts from a former feminist about binders”