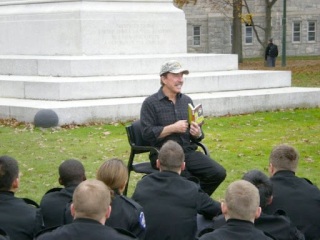 Chuck Norris hangs with the cadets.

Many important people have come to West Point.

and Miss USA although not on the same day…

Someone seems pretty happy to be near Miss USA!

Geraldo Rivera has stopped by WP and

so has The Prince of Orange. 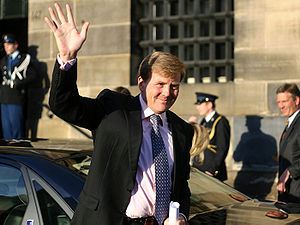 “Hey everybody, I’m the Prince of Orange! How you doin?”

Of course Presidents have traveled to WP and

so has Aunt Em all the way from Ohio!

Yet, I think that if you asked my oldest OS who was the sweetest person to recently stop by USMA, he’d say Cupid.

February 14, 2011 was Nate’s first Valentine’s Day as an official “boyfriend” or as they say in Spanish “novio.”

Nate and Lu began their official dating relationship about seven months ago.

If you haven’t read any of the background story and you like modern-day fairy tales, click here and here.

I respect their relationship because it is based on the right things and they are trusting in the Lord as far as their future together is concerned.

Long distance relationships are difficult but Nate and Lu seem to make it worth. Can you say, “awww”?

From the moment I met this young lady (and I remind my OS that I met her first so he owes me BIG time), I knew she was special. You know your son has a great gf when she asks YOU for Valentine’s Day ideas. We conspired and came up with a plan. Since it is hard to celebrate this day with thousands of miles separating a couple, we enlisted the help of friends at West Point.During the day, Nate got a message that he had a package to pick up. He arrived at Central Guard Room and here’s what he received.As we all know, nothing says “Te amo“ more than a flashy Spanish Valentine’s Day card.

Interestingly, our WP Cupid connection doesn’t speak a word of Spanish but according to Lu, the sentiments were just perfect. In addition, my oldest OS from the world’s great parents got a gift certificate to Sushi King, a sushi restaurant that also serves deli sandwiches located in bucolic Highland Falls.

If love alone could have flown Lu to West Point, I know she would have delivered her gifts personally. We pray my OS’s gf’s visa is approved in the near future. Nonetheless, we are thankful for good friends who believe in nurturing relationships between two awesome people. Last year for Nate’s 20th birthday, he also went to Central Guard Room. After hearing his name blasted over the loud speakers announcing he had a special package. We sent him this…

He traipsed back to his room with this cheerful bouquet.

I don’t know, which is better, teenybopper balloons of Miley Cyrus or the sweet love and friendship of a beautiful Salvadorena? DUH!

Speaking to my OS and hearing joy in his voice is cause for year-round celebration.Check out the pretty tulips Nate sent Lu!Incidentally the Hubs gave me tulips on Valentine’s Day when we were dating.Good thing Cupid is a world traveler!