However, before I tell you what happened next, let me share with you how I learned about what was going on between the two of them.

I remember talking to my OS on the phone in March. Nate told me that he chatted frequently with Lu. Judging by the tone in his voice, I sensed there was more to it than that. Here’s how the conversation went when I decided to ask some questions…


Allrighty then! I pulled up my big girl panties (figuratively speaking!) and realized that Nate was serious. I needed to pay attention. I needed to pray and I needed to give thanks. This was a good thing.


And before I knew it he was in El Salvador…


And this is where we pick up the story.

For several days Nate visited with Lu and her family. He stayed in a hotel in San Salvador (by himself thank you very much) and when he wasn’t with Lu, my OS visited exciting places like the Mr. Donut. 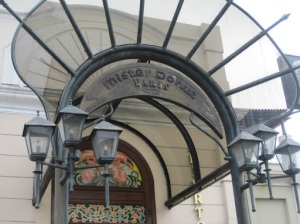 He loved the volcanoes throughout the landscape, the verdant hills but the most exquisite scenery was of course, you guessed it…Lu. Having spent time with Lu in prison (yes, we have spent time in prison together, click here for details!) I know how she can light up even the darkest place!


He arrived on a Monday and each night when Nate was in his hotel room, he and I would Skype or facebook. And I’d ask Nate in my usual extremely nonchalant fashion the same question in regards to him speaking to Lu’s father. “Did you talk to him? Did ya, did ya, huh, huh, huh?” I could barely stand it when he would say, “not yet.” Didn’t he know or care that his mama was waiting with baited breath to hear the outcome! Zheesh!

At long last the night arrived. After enjoying a dinner with Lu and her family, petting the dog and acting charming, “the” moment was at hand. Lu excused herself and went upstairs while Nate sat in front of her mom, dad, one of her brothers and her sister-in-law. In his very limited Spanish, my boy began to speak.  If your heart is NOT beating fast right now, you better check your pulse!


Lu’s sister-in-law served as translator and Nate said something like this.  Remember, this post has been cleared by my son.


“Senor y Senora ______, we all know why I’m here. I never thought I’d go to another country to see a girl. But when I met Lu, I couldn’t do anything else. This isn’t something I’ve ever done before but I had to come here because I am crazy about your daughter. I think she’s the best thing ever. Family is very important and I wanted to come here to talk to you in person. So really why I’m here is I want permission to date your daughter. I promise to respect her, take good care of her and keep Christ at the center of our relationship. I would like to ask you if I could have the privilege and the honor of dating your daughter.”


I must pause here and say this. You have no idea how many guys I would have avoided if I had had a father like Lu’s. A father who cared enough about his daughter and who was strong in character and faith to protect and love and to expect nothing but the best for his girl. Oh my soul, what trouble and pain I could have avoided.


Ok, but back to the story…


Apparently by this time, Lu’s sister-in-law, pregnant with her first child, was in tears and translating. She took a deep breath and told my son, “You’re a good man.” I think that is one of the kindest things anyone could say to a guy, especially my OS. Then Lu’s dad said a few things all culminating in him saying “yes.” 🙂 🙂 🙂

And then according to my very reliable sources, Lu’s dad asked my son to pray. And Nate began to pray. I give no credit to myself or to the Hubs but all the glory and honor goes to the Lord for He alone guided my OS’s words and actions.


You see, for so many years prior to becoming a Christian, I  longed to raise three honorable men but wasn’t sure how that was done. I wanted desperately for my precious sons to be guys who respected women. Good men are not extinct but sadly they are in short supply. We need a lot more, don’t you think? I wanted to do my part to change that.

Our family is woefully imperfect and just so you don’t think I’m uppity, I don’t get any credit for the blessings we’ve received, completely undeserving is how I realistically view myself. And for the moments I do feel uppity, well, the Lord gave me a 16 year old OS to fix that! 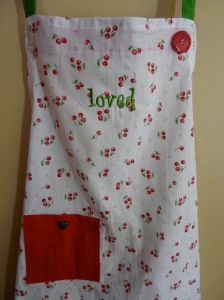 But I must admit, I am a proud mama. As a mama, as a woman, I believe with all my heart in raising the bar for young people. What girl doesn’t dream of someone esteeming her in this way? Seriously.


I can’t wait to share with you the next part…jewelry and no, it’s not an engagement ring but still delightfully lovely!

4 thoughts on “Love is patient…”