I don’t want to deceive anyone and make you think that we are just one big happy family all the time. We fuss and argue, we agitate and frustrate. Try as we might, there are times, far too often, when we even get disappointed in one another and yell. Even on vacation. Apparently I have a certain look, my children know too well where my jaw tightens, my eyes bulge out, it’s quite lovely I’m told. Luckily there are no pictures which have captured such a moment. If there are, I will delete such photos immediately. You will only see this look in person, never on film!

To prove my point, I wanted to share a very W-H moment we had during our trip to the coast. It was a cool summer night on Carolina Beach. There is a long stretch of beach at Carolina Beach where you can camp or make fires. Put this on your list of things to do before you die. It’s really awesome. And it might just be a guy thing but my men like to burn things. So on this crisp July night, Nate, Aaron and Isaac create a mighty bonfire and the hubs and I join them. We gather around the aluminum fire pit that was placed in a hole dug in the sand. (Remember this part).
Ike grabs a reed he had pulled from the sandbar and fashions a skewer for marshmallows. Quite resourceful. Apparently Isaac unwittingly adds extra fiber to the marshmallow which I note upon biting into my gritty summer treat. Then Nathan adds additional sand in my mouth when he kicks up his heels walking past me, not on purpose but whatev. (This might have been a eye-bulging moment.) Thanks, Soldier/Son!

The hubs and I depart and the boys continue their time by the roaring fire. (Remember this part.)
Legend goes that the boys were putting out the fire on the beach, ready to retire for the evening. It’s around 11pm and Aaron says smugly, “I’m just gonna enjoy the hot sand while you guys work.”Aaron holds the flashlight while Nate and Ike pick things up.
It is about this time that Isaac pours sand over his brother’s foot. The sand near the fire was warm and good but the sand Ike dumped on Aaron’s foot had been directly on the coals. It was poker-hot. In Aaron’s vernacular, “insanely hot.” Ike wasn’t trying to hurt his brother but indeed he did, giving him a second degree burn on the top of his foot! While the hubs and I are chilling in the condo, Aaron is screaming on the beach, Nate is getting angry both at Isaac for doing it and Aaron for shrieking, and our 12 year-old, orange-haired, freckle-face Ike is numb. A precious moment? Hardly. 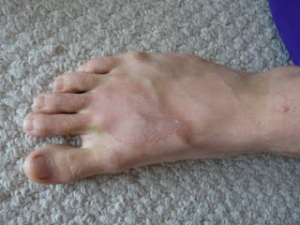 In the middle of the night, Aaron had trouble sleeping because of the pain. We helped him the best we could and in the morning, it was feeling somewhat better. If you ask nicely, Aaron will show you the singed foot hair.
Thankfully, though we were laughing about it by the evening. Aaron might have another scar to add to his collection. Ask him about the scar he obtained while running into a urinal, or hopping up a brick step to our house. He’s quite the conversation piece.
When all is said and done though, it is well with my soul. I still have three OS who when together, still say “I love you” to each other before bedtime. This includes if they are on the phone with friends. How many teenage boys do you know who interrupt a conversation with a buddy just to shout, “I love you” to their annoying kid brother? Yes, I am blessed beyond measure.
Woefully imperfect, etched memories are sometimes burned into our lives forever, pun intended. (This is a picture of our family on a ferry to Southport, days before the charming burning incident.)

I’d love to hear your vacation stories! Got a scar story? Tell me!

One thought on “Earth, wind and fire”