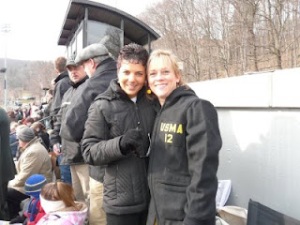 It has been a long-standing joke in my house that one day before I die, I want a parade for my birthday. So far it hasn’t happened and considering my birthday is in January and I don’t live in Hawaii, the chances are slim to none that this will ever happen.

But since becoming a mama of a Soldier, specifically the mother of a son at the United States Military Academy, I have seen more parades than I ever imagined. And I like it. I like it a lot. (said again in my best Jim Carey from Dumb and Dumber voice.) Yes, this is the second time I’ve recently used this quote in a post.

So if I can’t have a parade on my birthday, I’ll settle for the next best thing…seeing my son in a parade. That is cool. Really, really cool.
During Plebe Parent Weekend (PPW), our OS was in a parade which featured only plebes. You would have never known that these were the same young men and women who arrived at R-Day with that deer in the headlights look, trying to maintain composure as they were whisked away to places and experiences unknown and nearly unbearable. For most plebes, including our OS, these young men and women were relatively new to the parade thing prior to R-Day. But they now appear to be seasoned parade professionals. According to my OS, much to his dismay, they have devoted countless hours spent marching and executing each aspect of the parade. I know everyone in the filled to capacity crowd appreciated their hard work for it made for a very impressive spectacle.

First there was the drill team. My mouth gaped open as I wat- ched the trenchant skill of these young men. I was held in thrall as they effortlessly tossed the rifles back and forth to each other. I was dumbfounded as they performed an entire routine, not forgetting a thing, flipping the rifles in mid-air, grabbing them at varied places on the rifle and without missing a beat. Just when I thought their program was done and I was getting ready to erupt in applause, they’d press on and do another five

minutes. I can only imagine the hours they poured into this flawless execution.

Once they finished, I began to watch for my own VIP. My son was a Platoon Leader for his company and Nate was excited because he had a saber for the parade. I peered through the crowd and was surprised to see that indeed our OS marched with a very manly saber by his side but other stuff as well.

Nate strode out into the field with his company also wearing a very large hat with really big feathers and he was wearing a red sash. If you are not a West Point person, you might be thinking big whoop, a red sash. You might even conjure up thoughts of RuPaul, but friends, shame on you! You would be totally wrong. It’s not that kind of sash, y’all!

Here he was during PPW, out on The Plain, and Nate was wearing the same red sash which previously evoked terror and misery to the new cadets trying to complete Beast in the summer.

The dreaded red sash was an emblem of dread and intimidation until I saw it draped around MY boy’s uniform. From afar, the red sash and I had a healing, bonding moment, I guess you could say.

I felt pride and love overwhelm me and I know I was not alone. It was palpable as each person in the crowd peered to see their beloved child. It didn’t matter if your kid was right up front easy to spot or somewhere hidden in the middle, seeing 1000 Soldiers march in unison, it felt like we had collectively birthed each one of them.  A universal feeling of delight and appreciation warmed the cool morning air. So although my dreams of having a birthday parade are far-fetched, I have no right to complain on that day when I meet Jesus face to face. He has given me, as usual something above and beyond my wildest dreams.
I LOVE A PARADE!