I look at my life as a series of blog posts. If you are a blogger, you know what I mean. I scrapbook, although not as often as I’d like and I recall just prior to taking a picture, imagining the scrapbook page I would create. If you are not into that sort of thing, I have already lost your interest. My bad. 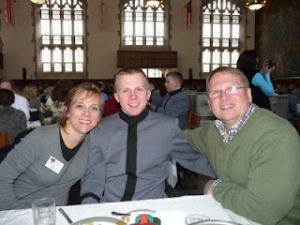 But going to Plebe Parent Weekend (PPW) was so bloggable. Poor Nate probably felt
like it was kindergarten all over again as we took pictures with nearly everyone who cheerfully greeted him including his teachers. I’m glad he indulged me, I don’t think he had much of a choice.
Since he is the first child I’ve ever had to attend college, I don’t know what things are like at other institutions of higher learning but it seems that a lot of famous people drop by West Point. During PPW, we got to hang out at one of the celebrity hot spots…the Mess Hall. 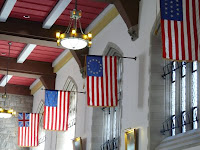 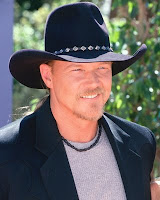 We enjoyed lunch in the Mess Hall on Saturday and as our OS gave us a tour around the facility, Nate told us that Trace Atkins had stopped by the Mess Hall the other day. Members of the Glee Club sang with him and apparently recorded a video with the Glee Club cadets that will be appearing on the American Country Music Awards show. They will be performing the song “Til the Last Shot’s Fired.” Click here to see the link. You will also be able to download the song at iTunes and all the proceeds will benefit the Wounded Warrior Project. I really appreciate this man’s loyalty to the troops and the military. I have never been a fan of country music but I like this guy and might even watch the ACM Awards on Sunday, April 5th.

He also said that recently Miss USA visited and gave the cadets a big “huah!” Btw, huah means “I’m pumped!”, “wow” and “yes” and is often used as a verbal exclamation mark at West Point. Seeing a pretty girl not in a uniform was a sight for sore eyes. Nate also said her assistant was just as gorgeous as she was! Miss USA was on the Poop Deck. I’ll just let that sentence sit with you for a moment… What’s a Poop Deck, you ask? It’s a balcony area overlooking the Mess Hall and I guess she encouraged the Corps with her beauty and charm. I will soon be blogging about Nate’s new gf so stay tuned. You don’t want to miss it.
As we sat down for lunch, our Soldier/OS told us about how during Beast, his plate had to be a thumb’s distance from the edge of the table. Things are more “chill” (relaxed) now in the Mess Hall and that’s a relief for many plebes. 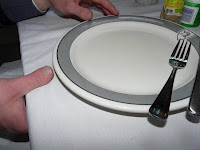 Nate instructed us also on how the milks all had to line up in a certain fashion. Can you believe it? 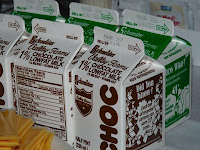 And somehow when the numbers 1-4 flash, it signifies who can get up from the table. I think this light system could have been very useful when my OS were little.  Many moms would be interested in purchasing this light system for their squirmy toddlers. 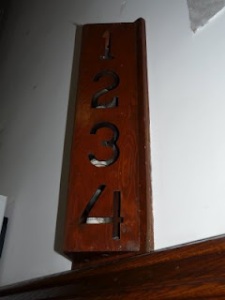 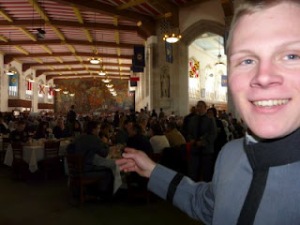 He also said it gets frustrating when people don’t pass the food around. DUH! This I found particularly interesting because this is the EXACT SAME THING I’VE BEEN TELLING HIM around our family table for years! I can’t tell you how many times I have to ask my OS to pass ALL the food around the table. It took my son eating dinners 10 hours away for him to finally figure that out!
West Point feeds about 4,000 cadets breakfast and dinner in less than 25 minutes.
The famous and the worldly, the popular and the patriotric, the lowly plebes and the revered firsties have dined in this nostalgic place. Wow. 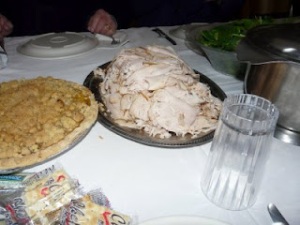 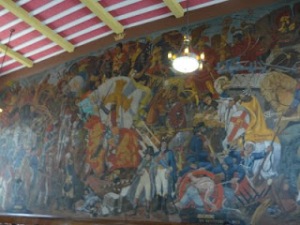 And on this Saturday afternoon, the United States Military Academy fed us, how humbling.
We had more time than the average cadet and had lively conversation with everyone around the table.
We enjoyed a family style lunch with other plebe parents and cadets. We sat at a 10 person table right near the giant mural which depicted many military and historic facts. The history and majesty of it all is impressive and seeing Nate in his element was positively delicious. 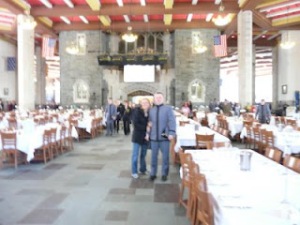