After gobbling up the chicken manicotti, I whipped out the sewing machine for my last project, not knowing this one was going to be a real doozy.

I had begun Aaron’s Thomas the Tank Engine pj pants on Saturday and felt fairly certain they were nearly finished. That feeling quickly dashed as Aaron tried the pants on for what I presumed would be the last fitting and announced these words which I will edit for my more puritan readers.
Aaron declared, “Mama, these pants are riding up my b_ _ _ s!” When I asked him to turn around, it was obvious that the pants were not only riding up his “area” but up his butt as well…basically like an Atomic Super Wedgie. I couldn’t help but chuckle. Honestly, they looked incredibly uncomfortable. They were hugging his behind and the seams of the material seemed to disappear into the “Great Unknown.” Ew.
So what was I going to do? My neck/back/shoulders were in agony, I had been sewing for hours, it was past dinnertime and they had to be done by 7AM the next morning? GA! My first inclination was to tell Aaron to just deal and suck it up. Couldn’t he wear them to school for seven hours and leave well enough alone? I suggested he just pull the pants down a little bit, that would do the trick. Problem solved, case closed. Personally, that would be the simplest solution as far as I was concerned.
Not so easy. Aaron reluctantly pulled his Thomas the Tank Engine pants lower but that was almost worse. I burst out loud. Now he looked slightly obscene and there is nothing worse or grosser than seeing a 14  year old boy in Thomas the Tank Engine pajama pants looking really inappropriate!
Aaron told me that he wasn’t going to wear the pants in their current situation. Great. I began to rip out the crotch with my trusty seam ripper and then I had him try the pj pants on again (with boxers!) because I thought if I simply relaxed the seam, it would be fine.
I was wrong. I don’t know about you but these are the moments where my self-worth is totally challenged. I go from feeling like the best mommy in the world to being the dumbest, stupidest, most worthless excuse for a mother ever. I was hurting and feeling more desperate by the second. Am I the only one who can be so cruel to herself?
That’s when I called in the big guns. My husband. Mind you, Mark hasn’t sewn a thing in his life but I needed a fresh perspective and had run out of options. We surveyed the pajama pants like we were looking at a map searching for a great treasure. Like a surgeon looking inside a body cavity. The crotch seams were completely gone and it looked hopeless. Then we got an idea, something preposterous and probably impossible…
Hey, how about creating a waistband?
Why was this so outrageous?
1. I have never created a waistband.
2. Mark can barely sew a button and has therefore never created a waistband.
3. I was beyond tired.
4. Did I mention I was really hurting???
I emerged from a fetal position and I’m not exaggerating, there we were Sunday, about 10:30PM, commiserating over how to make our first waistband ever either individually or as a couple for a pair of Thomas the Tank Engine pajama pants for our 14 year old son. Y’all, I have no idea how we did it but glory to God, by some miracle, without instructions, we saved the pants, the junk in the trunk and the family jewels! How do you like that! By 11:30 that night, after nearly nine hours of sewing, this project was almost complete.
I was telling my friend this story and she reminded me of a perfect Scripture verse…
James 1:3-5
because you know that the testing of your faith develops perseverance. Perseverance must finish its work so that you may be mature and complete, not lacking anything. If any of you lacks wisdom, he should ask God, who gives generously to all without finding fault, and it will be given to him.
These verses fit as well as my boy’s pj’s!
Please take several moments to admire the waistband. Behold the craftmanship.  Please, I beg you, behold the craftmanship! 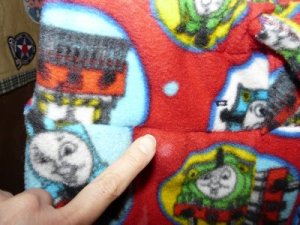 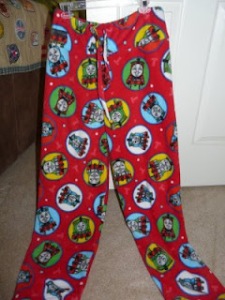 I don’t think I had a stitch left in me but I loved the strong hugs from my boy. His dignity was restored and he could go to Pajama Day with his head held high. Ok, maybe not, just wait until you see his outfit…check back tomorrow for that blog post and be prepared. May I suggest not reading Friday’s post on a full stomach? You’ll see…

4 thoughts on “Pajama Pants are a Pain in the Neck and the Butt!”