Before Nathan went away to West Point, a family friend gave our son an incredible graduation gift.

Ron, who is a husband and father of two, sent our son a framed copy of a quote by Abraham Lincoln, which by itself was a pretty awesome gift for a guy who loves history. But it was what Ron included in a card that deeply touched my heart. My husband’s high school buddy gave our son $100 cash.

What 18 year old kid do you know who doesn’t like cold, hard cash? Sah-sweet!
However, this bounty, wasn’t for Nate to spend on himself, according to Ron’s note, the money had one intention. Our son was required to spend that money creating a special time with his brothers. Ron also specified that this was BROTHER TIME, not mom time or dad time. I jokingly offered to hang out with them and Nathan quickly rebuffed that idea. You should have seen the excitement Aaron and Isaac had imagining doing some cool stuff with their oldest bro.
My son received many wonderful and generous gifts from family and friends. I do not want to minimize the kindness and love people poured into them, they are worthy of many blog posts separately. It’s just that I had never heard of anyone, in particular, a guy, thinking about investing in brotherly memories.
The guys went a movie, Indiana Jones (which wasn’t that great, btw) and out for lunch. Oh, how I would have loved being in a nearby table and watching my three ka–nuckle heads yukking it up. With the $100 my three sons went fishing and bowling. The guys went to Chick-Fil-A and grabbed some ice cream. As the day crept by when we were going to have to say goodbye to Nate, these moments became lasting treasures. 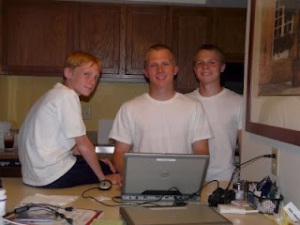 Forever, I shall remember Ron’s generosity and creativity. I was as blessed as my boys and I didn’t even have a handful of popcorn or a lick of that ice cream. I think it’s every mother’s dream to raise children who sincerely love each other and so far, that is proving true.

I’ve included a video of their bowling “match” and a few pics of the guys who were together days before Nate reported to the United States Military Academy and when they hung out as brothers on A-Day.
“How good and pleasant it is when brothers live together in unity!” Psalm 133:1
If you are ever in need of a special high school graduation gift, consider this one, folks!