My boys are growing their hair for the upcoming high school play. We have about four more weeks to go and so far they look they have mops growing on their heads. We are normally a freshly shorn family and so this is quite a departure, seeing my two oldest OS with a full crop of hair. Aaron has announced he’s getting a buzz cut the minute the play is over. It sounds like a very good idea at this point.

Since I can’t cut their hair I want to do something to improve something! So I find myself looking at my boys’ eyebrows, in particular my 13 year old’s – considering they look like two caterpillars are living on his head, it’s not exactly a difficult thing to do.
Last week I mentioned it might be time to introduce Aaron to the next level of manly hygiene – trimming the eyebrow hairs. He’s so stinkin‘ cute but the eyebrows seem so unkempt. 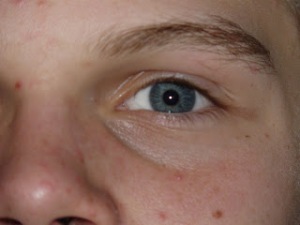 I hinted to Aaron that it was time to try and coax those wily eyebrow hairs to move upwards.
Do you think he looks like a fruitcake, (as his older brother suggested) with the upward reaching eyebrow hairs?

Or do you think it shows that my middle OS has an attention to detail and a keen sense of masculine pride?
I have since trimmed the eyebrow hairs and it made a big improvement. I’m also praising the Lord we don’t have uni-brow! I don’t think he could handle the pain.